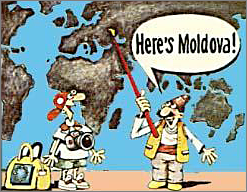 My name is Sergiu Ţurcanu (Ser-gee-ou Tsoor-ka-noo) and I come from the beautiful country called MOLDOVA of which you probably never heard. I like travelling, adore photography and from time to time express my thoughts online. I enjoy every moment of my life and consider myself a happy person.

Yes, all the photographs presented here under the ‘PHOTO’ category and all the photographs taken by me and used in blog posts are copyrighted. Please contact me if you’re interested in using my pictures or you can search my stock collection at Alamy.

The texts and other content however are licensed under the Creative Commons Attribution-Noncommercial-No Derivative Works 3.0 Unported and must be attributed to Sergiu Turcanu.

If you’re one of these Americans who think that Paris is a country and Iraq is just south of Mexico I can tell you that Moldova is in central Africa and you’ll believe me (and I usually do practice this joke on Americans). If you’re Asian, I must disappoint you – it is not Maldives! No, it’s MOLDOVA (摩爾多瓦, 몰도바, モルドバ, มอลโดวา). And if you’re European, not only you probably know where’s Moldova, but most likely you did in fact met Moldavians and did heard at least something about Moldova.

Now seriously: Republic of Moldova is situated in Eastern Europe in between Romania and Ukraine. It is a former Soviet republic and is an independent state now bordering EU. The people who live in Moldova are called Moldavians, but we are Romanians as nationality, we speak Romanian language and we have same ancestors and share the same history with our brothers from Romania. Moldova is one of the three big medieval kingdoms populated by Romanians. We are not Russians and never were, but todays Republic of Moldova are the lands kidnapped by Russian Empire in 1812 first and later by the Soviet Union after World War II, so that is why almost all Moldavians will also speak Russian language.

What is this blog about?

About whatever crosses my mind! But it is mainly about travels, descriptions of things I’ve seen, places I’ve been (tried to keep a travelogue, but I was busy traveling), latest internet & IT trends, various jokes and funny stuff, some politics (when I feel like discussing it, or when I get pissed), movie reviews and recommendations (well, at least I plan to) and it supposed to have some articles about photography, but I’m still working on that. Oh, yeah… and I plan to cover some languages topics .

Why some of your posts are in a strange language?

Because some people speak other languages too 🙂

How many languages you speak?

Four: Romanian (my native), English, Russian and Turkish. I also can understand a little bit of French and have basic knowledge’s of Chinese (Mandarin) and Korean. Maybe a few more are worth to mention, but that would be too much, don’t you think?

The website is powered by WordPress, which is probably the most powerful CMS today and certainly the most widely used blogging platform. Right now I use Foliotastic 1.0 theme from ThemeSnack and here is a short list of plugins in use (they change from time to time): Comments are managed via IntenseDebate with CommentLuv enabled, pictures are open in Lightbox Plus, SexyBookmarks are used for social media bookmarking, Retaggr – adds social/business card and tags the images, related posts are generated by LinkWithin, to pimp up some SEO juice I’ve got HeadSpace2 and Google XML Sitemaps installed, cforms is used for contact forms.

If you still want to contact me directly try one of these: